My father died nine years ago today. Got the call about this time, actually, which  validates my belief that nothing good ever comes from the phone ringing in the middle of the night. (I once chastised a late-night booty caller, as I have a lot of aging family members, and my first impulse is to wonder, “Who died?” as I go through my mental rolodex of who is battling what ailment.) 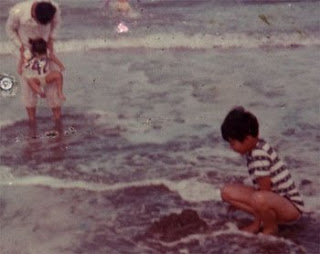 I knew it, too, the minute the phone rang… I had just talked with my Dad’s doctor earlier and made plans to head to Vegas that very day. I was just a few hours too late, not that it makes me angry or sad that I didn’t get to say goodbye one last time. These things happen.

I miss my Dad. Not all the time, mind you, I’ve gotten used to not having him around. But I do see him every time I look in the mirror; I have his face, after all. (Some people say I look like my mother, which technically is a compliment, but I suspect they’re just trying to be polite.) I have the shape of his face, his nose. The way the corner of my upper lip thins out unevenly on one side when I smile, I’ve seen it on my Dad and his siblings… it’s a Barreiro thing.

But there are moments that hit me like a mack truck. Like the time I dreamt that I had a beautiful baby boy… it was a few months after my dad had passed away. The kid was screaming bloody murder and I couldn’t get him to calm down. I remember saying “Please stop crying, your grandpa will be here soon.” Then I realized his grandpa was never going to come, and if I ever have kids, they will never get to meet their awesome granddad. I woke up crying worse than I did at the funeral.

Though Dad did humor me once… my mother scoffs at my prized, beloved teddy bear Strawbeary. I told my parents to buck up, she was my baby and just might be their only grandchild from me. My dad then tightly hugged that ratty, raggedy old thing as if it were a real child.

And there was the stressful, crazy 2008 when I was on my way to culinary school after a full day at work. I had been stuck in traffic for almost 3 hours and had asked myself why in the world I was putting myself through that hell. And when I realized it was what my Dad would have wanted me to do, I bawled the whole way from downtown LA to Pasadena. 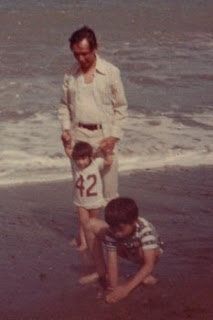 It’s not all sad memories. My dad was the sweetest, most good-natured, big-hearted (weak-hearted, as it turns out) guy you’d ever meet and he was ALWAYS telling jokes. He was ridiculously smart too… the only thing I miss about going to church was him teaching me Latin by translating the inscription on the altar walls just so he and I could stay awake during the sermon.

He was by no means a perfect man, but the way he loved my mother set the bar for how I want to be loved. People ask what I look for in a guy. Well, to be honest, someone a little like my Dad: a kind, smart guy who’ll make me laugh and really, really LOVE me. And have flowers waiting for me every week. Nothing sick and Freudian, right?

And Dad was my biggest fan. Those who know my story know that my childhood wasn’t all peachy. And moving to America, while fairly seamless, had its rough patches. My faith in myself wavered – still wavers – at times, but Dad was my constant cheerleader. It would have been easy for me to stray off the “path” but my Dad’s love and presence grounded me.

I’ll never forget the day he picked me up from school in 8th grade. Through a sea of electric red sweaters (Reno-ites will tell you that shit can blind you) and plaid skirts in the playground, my dad said he had immediately spotted me.

“You may be short, but I can pick you out in a crowd. You’re head and shoulders above everyone else,” he said.

I told this story to a friend of mine right after his daughter was born. He said he was going to tell her that when she was old enough. I told my friend it might just keep her off the pole.

A few months before he passed, Dad had remarked how my eyes had lost their sparkle. It stung. I didn’t even know I was unhappy then, but he knew. I’ve been chasing my bliss ever since… and in moments of uncertainty and doubt, a voice in my head reminds me that I can do it. Head and shoulders above… head and shoulders above.